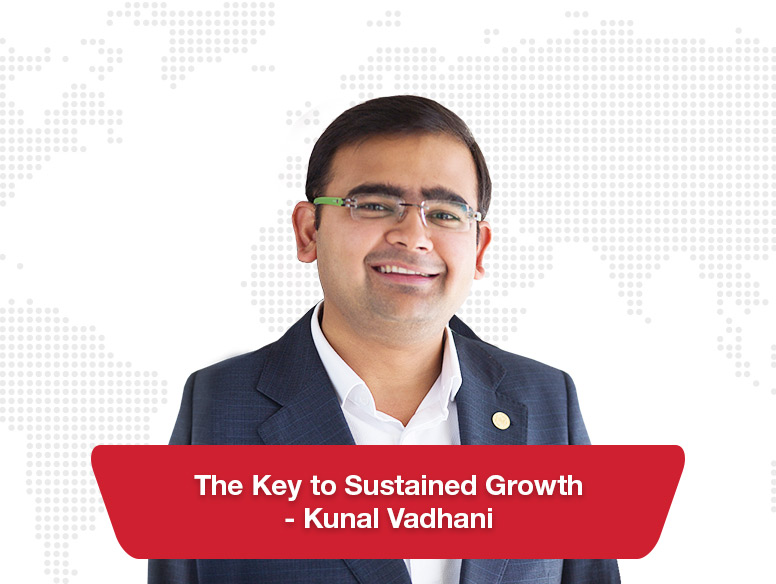 Celebrating a decade of growth & success in BNI, Kunal Vadhani is one of the most experienced members, who graciously shares his business expertise and wholeheartedly supports various chapters. Moreover, he also launched the chapter BNI Champions, which was named Chapter Of The Year at BNI UAE’s Annual event.

The key factor that has contributed to the consistent growth of the chapter over five years, as Kunal puts it, is the chapter’s culture.

“ The amount of love that every member has for the larger group is something I have never noticed in any other chapter. Each member wants to support every other member to do better, not just in business but also in life.

They believe in taking everyone together as they grow; they are not trying to compete, but they are really trying to create value for the members who exist in the chapter. I think that, above business, is what makes sure they are stable.

They aren’t afraid to be second, third, or fourth, as long as they are sure they create value for each member. That attitude of care that all these leadership teams have had through the years is what has made the culture so strong. I wish everyone could replicate it.” He shares.

“For anybody or any chapter listening in, pick quality over quantity. The minute you get the right members, the chapter switches on; it’s a positive cycle that you need to start. When you’re launching a chapter, of course, everyone is a bit worried about finding the right amount and right kind of people in the right amount of time.

BNI Champions grew to around eleven, then we reduced to about three, before we finally launched them, which is where the real change happened,” Kunal says as he imparts his wisdom on the factors which go into building a solid team culture.

“ We had no choice. The others weren’t pulling their weight; the chapter wouldn’t have launched had we not trimmed it down,” he adds, when asked about the reason to reduce the chapter size from eleven to three and rebuild again, for the required strength of twenty-five.

Kunal has adopted several supporting roles during his tenure at BNI. When asked about his experience with the cultures of other chapters apart from Champions, he replies, “ Rising Phoenix was very, very, very different to what I’m used to. When I went into Rising Phoenix, I had a lot of members who were seniors to me. So the first thing I had to do was understand the chapter’s culture, compared to how it was in Champions.

I made my mistakes, I received a lot of feedback, and we improvised. I started caring for the chapter, and the chapter responded, I made some friends for life.”

Word To The Wise

Kunal, being a seasoned member who has launched and supported chapters, gives his advice to new members looking to assume roles in launching and supporting chapters at BNI.

If someone wants to give back to the community, and that’s why they are doing it, I think that is what one should consider when they join.

If someone feels a lot of gratitude towards BNI because they have received a lot, whose lives have changed because of BNI, like mine, that’s the right attitude to have. It’s a service rather than a role. Don’t do it for the business, do it to help, and the business will follow.

Managing multiple chapters, switching between launching and supporting a group, and taking care of his own business, Kunal certainly has a lot on his plate. When asked about how he does it all, he shares the integral characteristic that aids him in balancing responsibilities at BNI, professional life and personal life as well.

“ You remove time for the important things in life, for me, BNI has been a life-changing experience, It makes me happy, it’s a part of my life, which is positively influencing everyday that I wake up, you just have to prioritise, I do my bit to contribute to the chapter that i’m part of.

When asked about his perspective on the direction BNI must take in order to grow in UAE,Kunal believes going global is the best option.

“ UAE being a global hub, for a lot of businesses in the world, I think the community in UAE should be at an ideal position to expand globally, with the support of our BNI network, we need to focus on leveraging internationally, we have so far been focused internally, the members need to go out there and explore newer countries, newer regions, the Collaboration can be taken to a whole new level.

We have an opportunity to be a truly global BNI platform here in UAE, because we are connected to a number of countries. The Expo is a prime example, if we can actually connect to the countries present, the results would be astounding. In a few years our members should be able to say that they have visited multiple countries and met various BNI members, and now they are successfully doing businesses” Kunal concludes.

Very inspiring…Keep it up Kunal!