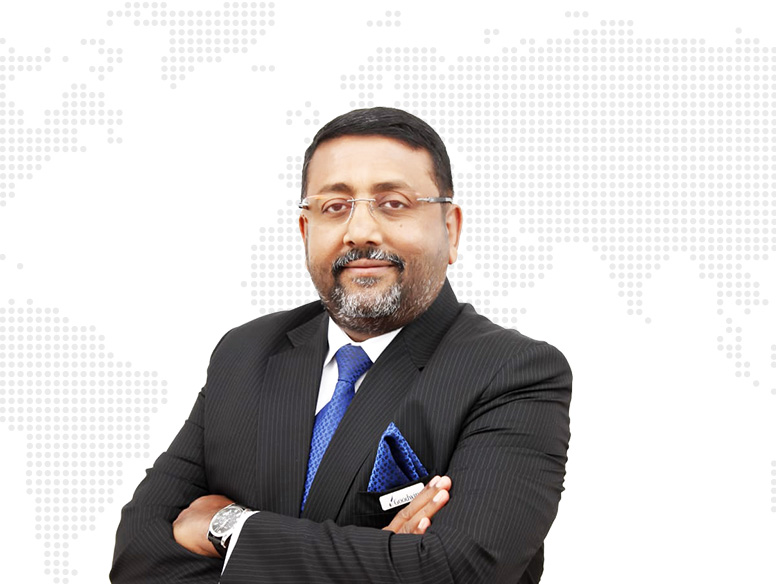 A fourth-generation lawyer, Devanand Mahadeva is the Director of Bestwins Law Corporation for Legal Consultancy and specializes in personal law. For the last eight years he’s been a proud member of BNI Gazelles. But, Dev actually started his journey with BNI at the chapter he currently mentors as an Ambassador.

“About 10 years back, I went as a substitute, incidentally, to the Insomniacs chapter,” he laughs. “The visit was instigated by a childhood friend of mine, who is an Executive Director now. That’s how I landed up at a BNI meeting and got to know about BNI.” However, Devanand wasn’t able to join the Insomniacs because his category was already occupied there.

Instead, he was encouraged to join the erstwhile Excellence chapter as one of the founding members. “I was inspired to join a core group of a chapter that launched in February of 2012. I became the first President of the chapter,” Dev says.

When asked about his inspiration to become Ambassador to the largest chapter in the region, Dev gives the credit to the BNI UAE team. “A big factor was being convinced by the National Office to get into a different profile. That’s how I landed up attending a Director Consultant and Ambassador training program a couple of years back. It inspired me to get into the DNA role.”

Taking charge of mentoring new members from a titanium chapter can be quite a challenge, and Dev details just what it entails. “I come from a platinum chapter and I’m an Ambassador to a titanium chapter, it’s a large number,” he smiles. “I directly deal with about 100 to 125 members. Insomniacs is a wonderful chapter to be around.”

Dev is eager to share the overall learning he’s experienced as an Ambassador. “I have got a better idea of how the whole system of BNI works,” he remarks. “Earlier it has been within the chapter and understanding what is happening. It’s more of business referrals, ‘Thank you for closed business’ and other things. But, now you go into a broader aspect of the structure of BNI and how things are taken care of.”

In fact, Dev has seen his vision for Insomniacs come to life. He says, “I remember, in a DNA meeting in February last year, we were asked what our goals are for our respective chapters. I remember talking about seeing Insomniacs as a titanium chapter that was the goal and the retention levels above 75%.” Now, one year or so down the line, Insomniacs is a Titanium chapter with an 81% retention rate.

Off the Beaten Path

Devanand has a wide range of unique interests highlighted during the BNI International Networking Week Challenge “It’s more of an adventure. I do off-road driving as a major hobby. I am one of the senior-most off-road riders in the UAE,” he says smiling. “Of course, biking is another passion. At the International Networking Week last year, a few of us bikers in BNI got together and said, “Let’s have a bike ride of all the BNI bikers in all the chapters in Dubai.” So, we all got together and did a lovely bike ride with BNI bibs.”

A longstanding Rotary Club member, Dev sees the similarities between being a Rotarian and a BNI member. “Rotary interestingly developed as something similar to BNI with classifications for business people to meet and network with each other,” he states. “It is about 116 years old now and has evolved into more of a social organization. Right now, predominantly Rotary’s motto is ‘Service Above Self’ and they do a lot of wonderful work around the world.”

For members thinking of taking up a role, Dev says, “Taking up roles teaches you responsibility. In an organization like BNI, taking up roles gives you a better platform and you can do better with the Givers Gain philosophy.”

We wish Devanand all the best in his journey as an Ambassador and hope for many more milestones and achievements in the future.

Excellent 👍. My Hearty ❤Congratulations 🌹to Devanand.

Congratulations! Wishing you many many years of Success and purposes being fulfilled. God Bless.

Ankita Rao – From Member to LT to Ambassador and...