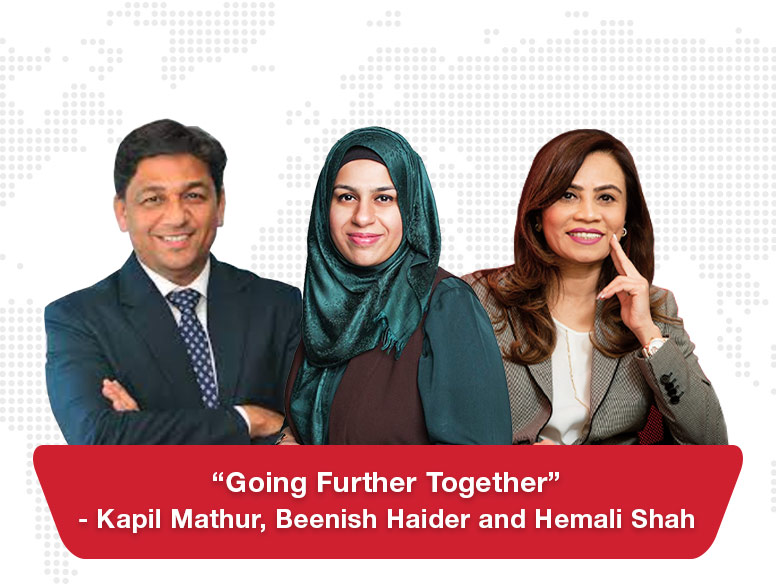 “I’ve been a member of BNI Energizers for the past seven years, and I’m a founding member of the chapter; recently, I have launched BNI Emperor,” Hemali says.

“I’m a member of BNI Emperor; that’s the inspiration behind me being here. I am a legal consultant and managing partner of a legal consultancy called Lex Consortia. Now I’m part of the launch team of BNI Victory, in a Growth Ambassador role.” Beenish says.

“I’ve been a part of BNI Energizers for the last eight years, and I was a founding member with Hemali. I work with the film called Holborn Assets, which is in the financial advisory space. I’m with BNI Victory as a Support Ambassador.” says Kapil.

“It is said that ‘If you want to go fast, you go alone. If you want to go far, you go together’. This is what I have implemented and embraced even in my company. After launching BNI Emperors, I attended one global conference, and someone mentioned a launch ambassador. Now, this word clicked in my mind, and I thought, why not form the same kind of a team here in UAE, we can go further, and we can go far. So I spoke to our National Director, Bijay Shah, and he said, “Who do you have in your mind?”. Since I had recently launched BNI Emperor, and I think it was just a five-month-old chapter, Beenish had joined after 20 members were already there. The moment she joined, I identified her as a driver as she was inviting so many visitors, who later converted into members.

She was the first one to become a Gold Club member. In that journey, I noticed that she had an excellent skill of inviting, and she was following up with me. So she was my accountability partner. She would always ask me, “Hemali, what happened to this person?” That helped me to convert those visitors into members. So I told Bijay that I had her in mind. He then had a meeting with her where he realized her skill and potential. Hence, she became my Launch Ambassador, and we are working closely and enjoying the journey. At the same time, I saw a few chapters where the Launch Director Consultant would put their best effort into launching the chapter; however, certain chapters could not go far. I realized that there is a difference in leadership. So every leader has their skill. They have their strength, and the key personnel should be involved from the start. I thought about the right person who could be the best mentor. I did not have to look far since Kapil is in my chapter, and he’s a master connector. I’ve seen his skill of mentoring and being empathetic with the members. I’m sure this team is going to create history.” Hemali emphasizes as she talks about Beenish and Kapil being the ideal founding members of BNI Victory.

“What inspired me is the absence of my skill set. I strongly believe in growing chapters and growing your network as I am someone who believes in sustainability in every angle of life, which means your chapter itself cannot be a sustainable chapter if members don’t have a mindset of growth. They can only have a growth mindset if they believe in the growth of visitors and qualifying those visitors. So definitely, that is a line that I am conscious about; however, doing that as a member for your chapter comes comparatively easier instead of coaching a chapter and coaching members to be doing that. I’m very aware of what my skill sets are, and what skill sets are not as strong in me. So a ‘support skill set’ in terms of taking my time, being very patient, supporting each member doesn’t come naturally. So my inspiration was to take this role as a challenge to myself. It is a steep learning curve.” Beenish says as she highlights the motivation behind her decision to take up the role of a Growth Ambassador.

“I have a huge admiration for entrepreneurs. I work with them very closely. In my first year, I realized how BNI cannot just be a game-changer for your work, but it can be a massive game-changer for the entire spectrum of your life. Entrepreneurs have a very lonely journey; you’re talking about your job, product, and services, but when you’ve got an army of salespeople doing that for you, it can turn things around. It gives me a huge amount of happiness and joy when I’m sitting with somebody, and I can give some value to them. So when Hemali was launching this chapter, she asked me to come on board. The only answer was “Yes.” I’m here with two powerful women, Hemali and Beenish. They are absolute mavericks. So it’s a privilege for me to be sharing this same space with them and being involved in creating a new chapter. I can see the massive contribution both are individually bringing to the table with their respective skills here. So for me, coming on as a Support Ambassador is something I’m really enjoying.” Kapil shares the factors which inspired him to come on board as a Support Ambassador to BNI Victory.

“At the beginning, we were figuring it out by ourselves. For instance, one day in the morning, I was not feeling okay. I called my Secretary-Treasurer, and I asked her, “I am not feeling okay; what should I do?” She says, “It’s okay, you don’t come, and then I didn’t go, and then afterward I received a letter that they missed me, and that time, I figured that my absence makes a lot of difference. Before BNI, my life was in boxes, home box, car box, and office box. So I joined BNI to meet more people and network, but I was not aware that I should also look into my network and show that even I have a network outside who I can invite and grow my contact sphere, I can help all the members. I realized much later. At that time, there was no BNI Business Builder.

It took little time for us to find out what was required and how to do it. Sometimes I would say that we fell, and we learned by introducing BNI victory. We are eliminating all those hurdles for all our members. So, mentoring is being provided from day one.” Hemali speaks about her experiences while acting as Launch Director and how it made her see the importance of having a Launch Team.

“I would say it helps the sustainability of a chapter because there’s someone to tell you why and how it should even be sustainable. The mentoring, growth, accountability, and your launch team is a driver. So for one person to drive an entire chapter has been happening, and people will do it. However, it’s about facilitation, right? So I think these roles definitely cover, if nothing else, facilitation, mentoring, sustainability, growth, accountability, guidance. All of these aspects are taken care of just in these two roles. I remember how much we had pulled down Hemali as well as the launch director thinking that “Oh, yeah, she’s there. She’s meant to do everything,” but as new members, you think, “Oh, okay. The Launch Director is meant to do everything” but it’s not. Within those roles, you support each other, and the chapter sees that too. Ultimately, it becomes easier for them to visualize and internalize.” Beenish adds.

“In the case of BNI Emperors, I was doing everything but, when my leadership team came on board and was doing all the work like they were dividing the work, every role has its responsibility. All three of them told me, “Hemali, you were handling all these things alone?” So there are a lot of things going on at the backend. In BNI Victory, we just started the expectation meeting. We made it very clear to all the members regarding the instances in which they would approach Beenish as she’s a growth ambassador. One of the guys, who joined, is handling 2000 plus employees. He has joined just to become a better leader. So that is GBH consulting, and yesterday, I got one message from BNI Global, some other member, saying that they want the stadium in Saudi Arabia, and GBH is the largest company here, so we asked if they can do it. This is the way referrals are being generated. People have already started getting business, supporting each other, and generating referrals. This is possible because it becomes very easy to grow when Kapil explains contact spheres in-depth and focuses more on giving rather than receiving. We support and mentor every new member to every extent. If they find they are not benefiting them at any point, or it will not benefit the chapter, we let them go, and this is a difficult conversation, which I have learned from Bijay.” says Hemali.

“If you think this is right for you, take it up and create the value for other members, because eventually, whatever you sow, right now comes back to you manyfold. You plant those seeds of credibility, and you will see the results of that. It is a matter of great joy when you see members getting engaged and understanding the process. Having been through the entire journey myself and seen its benefits, it would be very nice for anybody to get involved with this.” Kapil shares his words of guidance to members looking to take roles in the Launch Team.

“I will tell you that being a Launch Ambassador is not easy, so you should take it! So, I love challenges, so when you talk about Support Ambassador, it is limited to the new members coming in. Launch Ambassador is the only ambassador role available to all the members. So, that means, even in terms of our learning, dealing, exposure, this is the only ambassador role that will give us access to all the members to gather our data and create our case studies.

Who are visitors? What are qualified visitors? How to identify them? How to invite them? What is the process of invitation for launch? These are the questions a Launch Ambassador has to deal with. This requires a lot of commitment, self-motivation as well. So, my only advice would be, please take it up because it will give you the exposure of skill sets and challenges and members and your visibility that you actually cannot have in any other support role. But, also, set your expectations right.” Beenish adds as she emphasizes the challenging aspects of being a Launch Ambassador.

“My Victory chapter is for the busy business owner. UAE is a transient country. So people travel for business and sometimes they face difficulty attending the chapter meeting every week. Victory is the only hybrid chapter in Central Dubai. It becomes very easy for them to attend even when they are traveling. So we have people who are traveling, and online is the future. My Victory members are very, very happy. Victory is the only chapter which is in the downtown area. So, it’s easily accessible. We meet every Thursday. The support of Beenish and Kapil has helped people understand the values of BNI. It helps them in their journey to grow further.” Hemali concludes with a message to the members who wish to join BNI Victory.

You bet, you are with the right team when Beenish Haider, Kapil Mathur, and Hemali Shah work together… It is a success all the way!