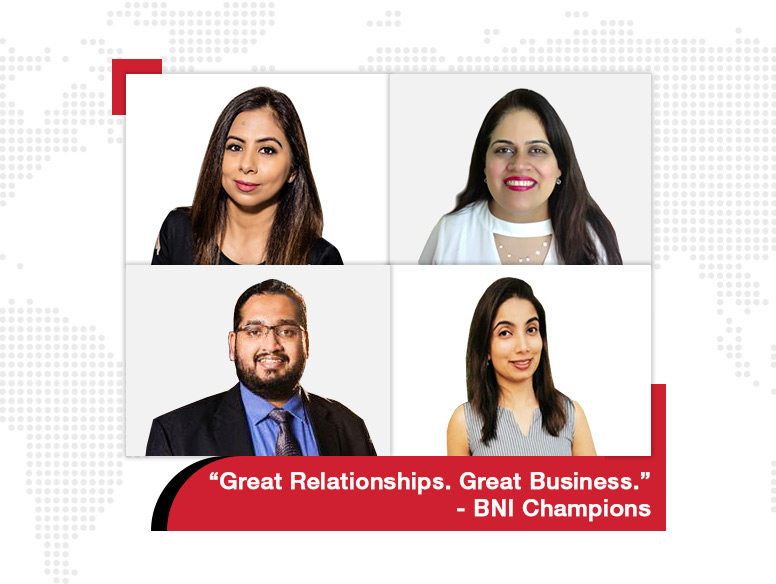 BNI Champions Leadership Team, Deepa Bellani, Suzanna Varghese, and Milan Beeru join us on a special occasion. Their chapter has reached a milestone of USD 50 Million in closed business! The leadership team begins by sharing their respective experiences in their BNI journey.

“I’ve been with BNI Champions for two and a half years. I’m a spa consultant and also own a few spas. I’ve been lucky to get what I wanted. As they say, the things you cannot measure are also a lot. Learning, Business, Friends, Relationships..it has been an amazing journey”, says Deepa

Suzanna then introduces herself, “I run a company called ‘Nudge For Better.’ We raise awareness on social and humanitarian themes through innovative, creative products. BNI happened by accident for me. I was having a very casual conversation with a friend. She said. ‘you should come to check this place out.’ So I went in and fell in love with Champions. I felt this is where I need to be.”

“So my BNI journey started almost two and a half years back, and it happened over cricket! I represent a company called Graphic International Center, and we are an office automation company. We are distributors for photocopiers, binders, shredders, etc.” says Milan.

“BNI Champions has always stood by ‘Business with Heart.’ A lot of people assume that we have relations, bonding, and camaraderie. But there is business happening well and to achieve such a big number, it has been a series of different businesses who’ve got business and have announced Thank you for Closed Business. So it was very important to showcase their businesses to those wondering whether BNI is the right platform or not, whether Champions is the right way to go, and whether there is business. Apart from building relationships, we do great businesses as well. I mean 50 million dollars is definitely no joke. So it was extremely important for us to showcase it in the right manner. Our chapter is a great mix of all businesses. We achieved this number by having great relationships, meeting up every Tuesday, having our one-to-ones, having our referrals, and just doing the basics right.” Deepa throws light on the factors that influenced the chapter to achieve this great milestone.

“The sole objective of the leadership team is equitable distribution of business. So the TYCB value may vary, but everybody gets his or her share of the pie.” Deepa adds as she reflects on the fact that BNI Champions has the Highest Seat Value in the region.

“The ambassador role plays a vital role because they are the ones who clear any doubts, which may arise even from the mentor-coordinator level. They are the ones who guide the new members. So, in Champions, we always say ‘Givers Gain.’ That’s the philosophy we go forward with, and that is quite literally being shown from Sandra’s side also whenever we need her, she is there to give her support, not only to new members but all members”. Milan shares the importance of having an ambassador and his thoughts on Sandra Bhojwani, who has come in as the new ambassador.

“So, the beauty of Champions is that the transition is seamless, the thought processes of the next team are pretty much the same. The idea or the goal is to have the members benefit; there is no other objective. So it’s very easy for us to hand it over to the next team. The next step, we will be celebrating 100 million USD soon; the chapter’s growth is key. We’ve got some really interesting categories open, and I’m sure those categories will give us bigger businesses in terms of quicker turnaround and stuff. We started with 20-25 members, and we are at 61 today. So, I think the next 50 million will be faster. Champions know how to do their basics right, and I don’t think we need to reinvent the wheel. We don’t need to radicalize anything. It’s a matter of just adding your touch to it. So I am hoping that the next term will be rocking as well” Deepa shares her vision for the future team leaders.

“Just continue with what you’re doing. We’ve always done a really good job of doing the basics right how Deepa had said and step it up, step it up and just keep going. That’s all we need to do, and ‘Business with a Heart,’ keep that very close to our hearts and just keep going.” Suzanna adds.

“Just follow that motto, and whatever we need to achieve as a chapter, we will achieve it. By the way, we would have hit the 50 million mark last year. But, because of the pandemic, we just took a one-year break.” Milan concludes.