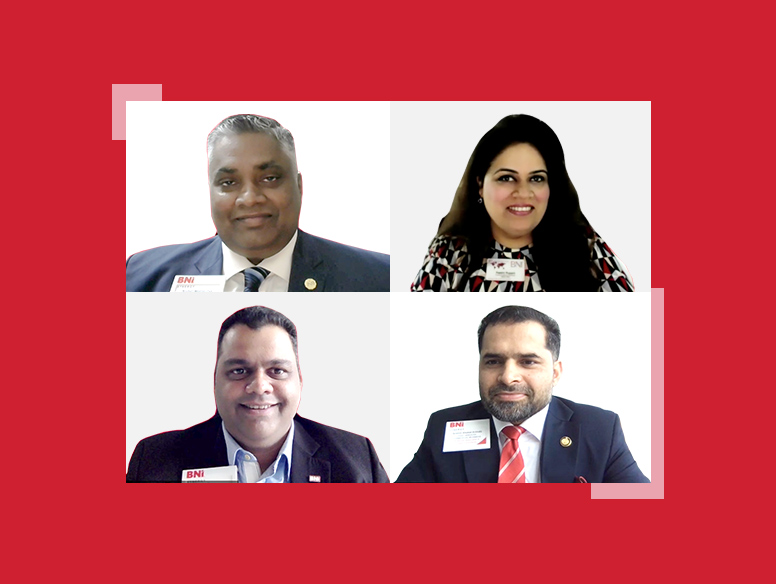 ‘Growing Forward Together’ has certainly been the motto for BNI Synergy riding on the high of becoming a Gold Chapter. The journey to this achievement has had its own share of ups and downs. President, Ibrahim Khaleel Arimala, has been a BNI member for 11 years and has been a part of Synergy before it was relaunched. “I joined BNI Synergy when the chapter was called Aurora,” he reminisces. “At that time there were only between 15 to 20 members, and now we’ve reached 46 members.”

Vice President, Roshan Weerasuriya, a BNI member for nine years initially visited as a substitute. “I first came as a substitute for my former boss, incidentally at the Early Birds chapter,” he smiles. “That’s where I was introduced to BNI. When I moved on from there, I started with Synergy with the new company I was with.”

“My journey with BNI started in March 2017, and it will be a lifelong journey,” says Secretary Treasurer, Faisal Mazid Kumandan. “It’s been a beautiful journey, and it’s an absolute privilege to be part of such a beautiful chapter.” In fact, he learned about BNI from an employee and was sold during his first visit. “Within half an hour of the start, when people introduce themselves in the 30-second pitch, I decided this is the network I want to join. Once the meeting was over, I was ready with my cheque. It was a no-brainer for me.”

Along with becoming a Gold Chapter, Synergy is also celebrating the return of in-person meetings. “The celebrations started on the 30th of August when we went back to in-person after a year and a half,” Faizal adds. “Wow, what a feeling it was to be in person and meet my fellow members! That was the start of the celebration and it will continue this month. We are planning to host a grand social.”

It hasn’t always been easy for the team at Synergy as Ibrahim shares, “There were ups and downs as every chapter faces, and two times it was frozen. Around nine to ten years ago, we relaunched as BNI Synergy. Since then, it has always been around 25 to 30 members.” However, the reward for the work they’ve put in has been unmatched. “This time when we took over at the Leadership Team, the magic happened. We made history in BNI Synergy, we’re now 46 members and we have a 91% retention rate,” he adds.

Roshan has been amazed by how BNI has evolved with Traditions + Innovation. “From those days of moving out with slips across the room. It used to take a lot of effort to get that done,” he laughs. “Today you have just one or two clicks on BNI Connect to finish the job.”

When asked what the Leadership Team has learned to bring about this boost in membership, Roshan says, “The most important thing for me personally, is the engagement. If you can be engaged with your chapter, with your members, especially as a Leadership Team, that will be one of the key factors that drive the chapter.”

Next on the agenda for BNI Synergy is more growth. “When we took up the second term, we had the plan of achieving 45 members by 6 months, which we already achieved in 3 months,” Ibrahim smiles. “The new incoming team, maybe they’ll plan to become a Diamond Chapter.”

For Vice President, Roshan, Business Builder has made it much easier to tap into the core value of Lifelong Learning. “It’s a very important tool,” he remarks. “There’s so much more in Business Builder that can be used, especially to push our podcasts and assign training programs.”

Keeping the BNI Hour of Honor is a practice Ibrahim encourages his fellow BNI members to follow. “I always keep an hour of honor in a week. You get the time to go through Business Builder, or book a 1-2-1 or read Dr. Ivan Misner’s books.”

In the days of online meetings, and online inductions it can be difficult at times to engage new members. Faizal says the Leadership Team putting in the effort can make the difference. “Making new members join is relatively easy, but integrating them in the chapter and making them feel wanted is a bit difficult,” he states. “We take the new members out for a President’s lunch. That’s what we’ve been doing for the last six months.”

The team at Synergy ends the interview with tips for new members. “Step in for roles, and be proactive,” Ibrahim says. “Don’t wait for someone to call you for 1-2-1 or to tell you to follow the basics. Then you can see the results.”

“Taking up a role is about honoring the commitments. It’s not to be taken lightly. For the new members, do step forward, it will give you a lot of visibility,” Faizal adds. “You will see the chapter from a different perspective. When you’re sitting on the other side of the fence, you don’t see how the chapter is run.”

Roshan signs off with a statement for potential members. “For anyone on the fence it’s simple, take that leap of faith. Unless you do that, you won’t know the benefits and the awesomeness of BNI. The numbers across the globe have not gone wrong. Get into the system and you’ll see how if you work with it, it will work for you.”

A huge congratulations to BNI Synergy on becoming a Gold Chapter, we wish you all the best in your quest to achieve Diamond Chapter status.

BNI Race to your Success