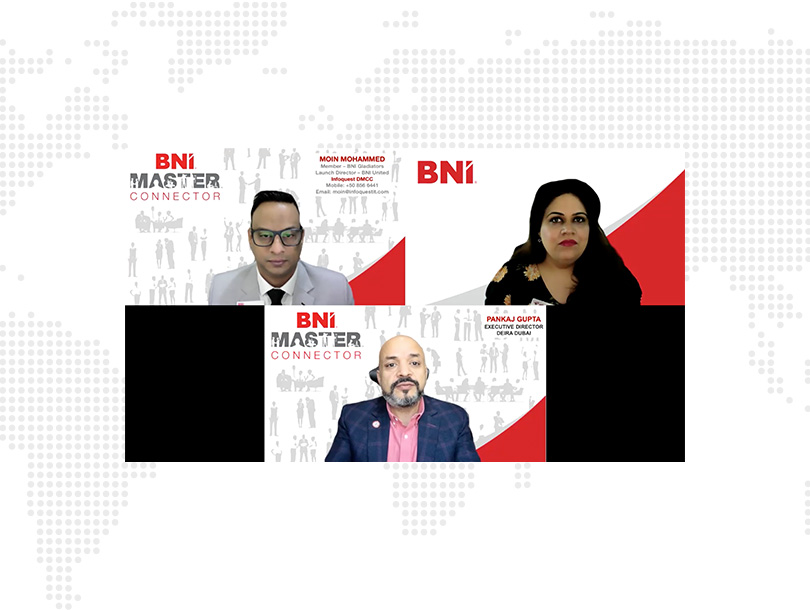 Launch Director, Moin Mohammed and Executive Director of Deira-Dubai, Pankaj Gupta have taken the core value of Traditions + Innovation to the next level by launching BNI United, UAE’s first permanently online chapter. The fastest chapter ever to be launched, it took them less than two months to get BNI United up and running. So how did they do it? “We had a very clear plan and agenda on how to achieve this milestone,” Moin states. “We worked tirelessly to ensure it launched on the 13th of April 2021.”

Interaction and bonding between members is still important. Instead of having socials every three months, the socials at online chapters will be more regular. “Online chapters will have one social every month and 1-2-1’s can take place in person or on Zoom,” he adds.

The cost of a BNI membership for an online chapter remains the same, however, there will be a reduction in some of the fees. “The only difference is when in-person chapters go to a hotel venue, they’ll have weekly fees to cover that. This chapter will not have that cost,” Pankaj clarifies.

The timing of weekly chapter meetings is another difference you can expect at BNI United. “Since it’s not an in-person chapter, we’re not worried about people committing time to reach the venue during office hours,” Pankaj adds. “This chapter meeting is set up at 10 am.”

It’s very interesting to hear about the changes Pankaj and Moin are creating which would make BNI United much more accessible. When asked about the target market for permanently online chapters, Pankaj is ready with some questions. “In our visitor orientation room, how many times have we seen people saying they travel a lot and cannot commit to weekly meetings? Or, I have kids or I cannot commit to every week early morning. What about businessmen further from Dubai?” he asks. “This online concept opens the door to every one of them. The only thing we are looking for is that they should be willing to attend the monthly socials.”

There is an incredible range of members at BNI and Moin is excited to talk about what they bring to the table. “Unity in diversity is how I would describe BNI United members,” he smiles. “They are all committed to helping each other with the specialization they bring in. They are in the process of growing themselves. At the moment there are enough categories to make the chapter self-sufficient in the passing of referrals.”

The growth of BNI United is the clear vision for the future. Moin says, “All our members are highly motivated to grow BNI United to 40 plus members in the next few months. They have understood the importance of chapter size and its benefits from training.”

Congratulations to BNI United on achieving its goal of becoming the first permanently online chapter. We wish them the best of luck as they continue to grow in the future.