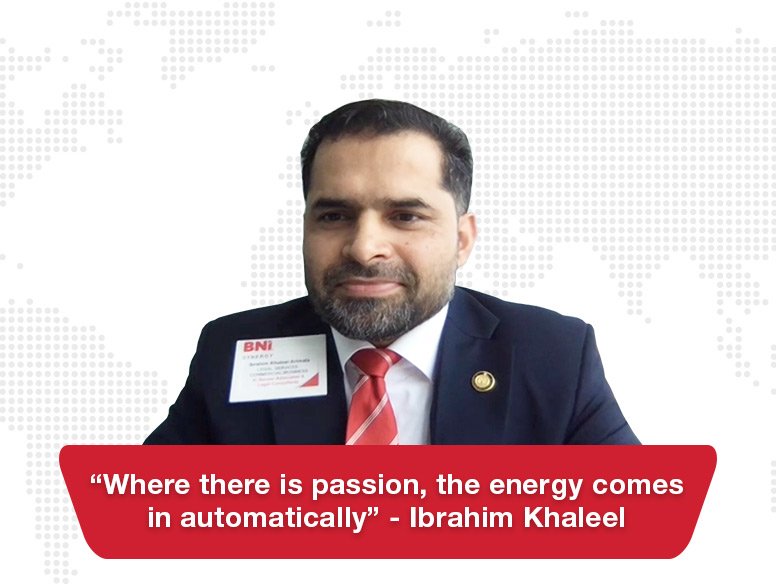 A lawyer by profession, and the Managing Partner for Mussab Ali Alnaqbi Advocates & Legal Consultants, Ibrahim Khaleel has been in Dubai for 18 years. He’s been a member of BNI at Synergy for 11 of those years. When asked, how does it feel? Ibrahim smiles and says, “I feel proud to be a part of the world’s largest networking organization.”

When asked what made him join BNI, Ibrahim says, “As a lawyer, I always believe in word-of-mouth references. The relationships, the contacts, that’s what gives us business. So I was looking for a way to build relationships, contacts, and connections.”

The first time he was invited to a meeting at BNI Synergy, it was still named BNI Aurora. The number of members was nowhere near where they are today, but Ibrahim was convinced it was the place for him. “I visited, and at that time, there were hardly around 20-25 members,” he adds. “I liked the concept, I liked the networking opportunities, and I decided to join!”

After joining BNI, it’s all about using the tools and following the culture. I followed the BNI basics, and it was a top priority for me to attend the meetings.

As one of the most senior members at BNI Synergy and President in the last term, Ibrahim knows it hasn’t always been smooth sailing. Regardless, he’s been hitting many milestones and achieving KPIs, even during these interesting times. “When I took over, we were meeting online,” he remarks. “There were 32 members at the time. So what we did as a leadership team, we said numbers matter. In terms of referrals, closed business, and visitors. In the past, we had many visitors, but then they discovered other chapters with large numbers.”

Focusing on the BNI basics and adding in a few innovations of their own proved to be the trick. “We were focusing on building the culture and the basics. From there, it started,” Ibrahim says. “When new members joined, we started taking them for a President’s lunch. We trained the new members about BNI culture and set the expectations and commitment from the very beginning. Members liked it and started inviting visitors.” Today, BNI Synergy is a 52 member-strong chapter, and they’re just getting started.

Givers Gain isn’t just another core value for Ibrahim, who is passionate about participating in CSR activities to help the needy. He says, “I’m a part of an organization called Dubai KMCC; we have been working for 45 years in Dubai.”

A purely non-profit-based organization, the members work on humanitarian grounds. “Whoever needs assistance, we provide pro-bono legal advice every week,” he adds. “We conduct blood donation and medical camps along with art and cultural programs.”

During difficult times earlier in the year, there were 500 people on the field helping those staying in labor camps. “We worked closely with different departments, like the Dubai Police, to shift those who tested positive to isolation wards and supply food and medicine,” Ibrahim says.

He signs off with some excellent advice for new members. “BNI is a wonderful business platform for those looking for opportunities, connections, and relationships. I’ve never seen a networking platform that is so focused and structured,” he states. “If you use the basics and follow the BNI culture, it will work for you.”

How to Master the Art of Remote Communication- Things You Wanted to Know!

In fact I first met Ibrahim Saab at our office, but his approach made me feel that we know each other since long , He is quite charismatic personality. I like his thoughts and work on the idea of “Growing together” and “Giving Back”.

First I met IK saab on BNI Platform and i got he is a great human being, with a sense of giving back to society and supporting others.
He is a great motivator, guide and supporter. All the best Sir …