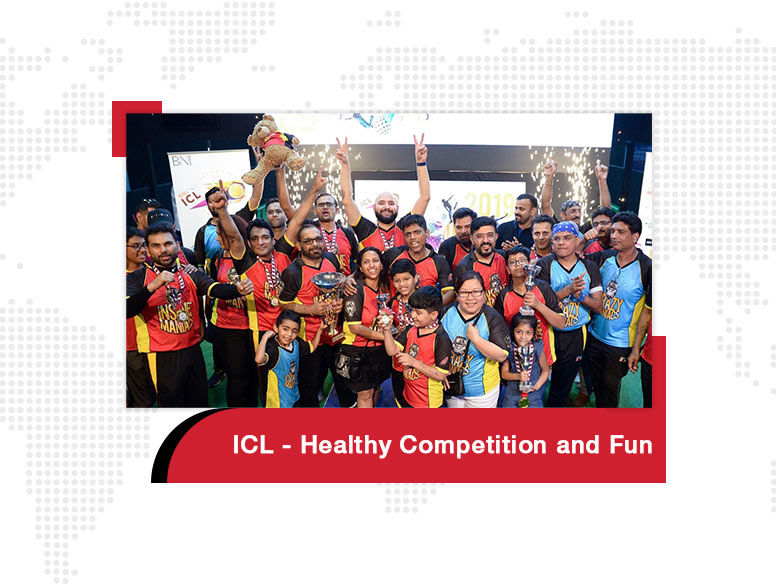 Kunal Vadhani, Sajith Ansar, Lijo Ittoop, Samarth Meherish, and Lalit Kumar join us to talk about this year’s Inter-Chapter League, an exciting cricket tournament amongst the chapters of BNI UAE.

Networking Is A Sport

“This is the fourth ICL, it started small, and I think we realized that there are a lot of chapters, a lot of members who play cricket. I believe it is the largest sport, which was common. Interestingly, it’s a team sport, which has eight people. And then there are substitutes for almost 10 People. It started with four or five teams in the first edition, and it kept growing. More than the tournament or the finals, the lead-up allows us to meet other chapters, network, interact and get to know many people.

In fact, over the years, so many of us have done business and passed referrals because of cricket. Otherwise, they’ll be chapters we would never know, even in the annual awards you just meet. Here, you really get to know the person; you’re bonding, seeing the worst side of people and the best side. So cricket really became an icebreaker.

We have to make sure the practice is more important. So we kept postponing it because of COVID and ensuring enough time for practice between the chapters. And also, it helps the bonding of the chapter. So that was one of the things we looked at.”

Sajith throws light on the benefits of using this sporting tournament as an opportunity to widen your network and build a strong bond with members with whom the chances of meeting were quite slim during normal events.

“There is a WhatsApp group where we used to play a lot of cricket together, and suddenly we realized there are lots of BNI people joining in. so we and then we were just discussing that we should do something which is within the BNI community itself. So that’s how the idea came across. It’s been good fun.” Samarth talks about how the concept of ICL began in the first place.

“ We’ve got a lot of people via cricket into BNI,” Sajith states. “If you go and watch theater, right? It all seems great when you’re watching the play that goes on behind. Nobody really knows what’s happening. So like you’re saying, yes, it’s been fairly smooth for the first three years. Then, of course, unfortunately, we had this two-year break, which nobody could help after that. But, there is a lot that goes on behind. The whole idea is to ensure that the chapters are getting enough time to bond amongst themselves, which happens when they practice. We’ve been doing it now for four years, well, I’ll count it as six, because we did try and plan it in those two years that we never had it.

We’ve known each other for, I think, over ten years now. Because that’s how we all met, pretty much it was all thanks to BNI that we’ve all met, and now we’ve become family. It’s been an amazing six years of ICL. We’re so glad we’re finally doing this again.” Samarth says as he highlights the process of organizing this event after two years of the pandemic.

“This happens to be the biggest ICL tournament yet, larger than ever, and it’s a good comeback. I know that people are desperately looking to come back to this event. So I joined the second ICL, and the third ICL happened, and fortunately, we won both of them as members.

I started on that WhatsApp cricket group. There were members across chapters. There are occasions where we have gone for shisha and food after the game. So there are a lot of networking opportunities that happen outside of the games, and when I started, it was twice a week. Now, we end up playing tournaments. This has expanded to other sports, but cricket is very close to the heart of many people from the subcontinent. It has taken its own life.

So it has created many opportunities for people to know each other. For example, I would not have known Lalit if not for this cricket league; I met him during one of the cricket matches. You need a certain amount of visibility as part of the BNI philosophy. So I guess this gives you a lot of visibility, and that really helps.” Lijo focuses on the networking opportunities that present themselves in the form of ICL.

In The Spirit Of The Game

“Competition is quite a small word to describe what happens there on the field. Outside, we’re all friends; when we’re practicing, it’s amazing people helping each other. We’re advising each other on how to improve your game and what you should be doing as tactics and all of that. But when it comes to the tournament, we talk about the Social Media Awards, on the day, on the field. So it’s actually quite crazy.

We’ve had people dance when they take wickets; we have people cry out, dive, people don’t care what they’re doing on the day, all that matters is we want that trophy, and everyone is just focusing on that. That being said, We’ve never had something like unsportsmanlike behavior ever happen. People always know their boundaries. So people have always made sure that they play within a certain framework of friendship and camaraderie that BNI provides to us but heating up, it surely will be there. It always has been” Kunal tells us about the friendly competition present during the tournament.

“Yes, cricket being the core, the Warriors, Champions, Insomniacs, everyone will be fighting amongst each other on the field. But outside the field, they will be networking, having fun, dancing. It’s a good package for the whole family.” Lalit shares his perspective on ICL being more than just a tournament; it’s a celebration.

“We started with six teams. Today we are at 16. So that’s how the involvement has been like.” Samarth speaks about the growth of ICL since its inception.

“In one of the tournament, we were arranging players to convince the team to come, begging them to sort of fill the slots. Now it’s the opposite. Now it’s people asking; we want to add more teams” Sajith adds.

“Gazelles has always been in the final; Champions has a good team, Warriors we know has a good team as well. Of course, there are Insomniacs who won this tournament thrice out of three, so they are definitely ones to look out for.

There are a couple of teams which I really appreciate. There is the Golden Gazelles, which has over 40 or 50 years old members. They’re just playing for fun, and it’s so amazing to see that they know they don’t have the stamina to win or they haven’t played in a while, but they just want to take part, so I think there are a lot of teams to look out for this time.” Kunal tells us about the teams to watch in this edition of ICL.

BNI Race to your Success